Some thoughts on Racism - and a good example of one. 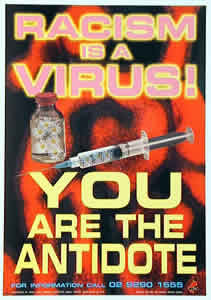 Today while taking a quick peak at that low-life in Lambeth Walk I noticed how the "R" word - racist. OK, this should be interesting. Very quickly it turned out that it talked about a tragic incident when a group of black British nationals invaded a home of a white girl, made her call her boyfriend and then subjected them to unmentionable horrors. A tragic event, but there was no reference to racism or racially motivated reasons for the crime. So why say it was a racist attack.

The blog says it .... because it was "carried out by black criminals against white people".

So to make it clear - the low-life in Lambeth Walk considers any attack by someone of color against a white individual as being racist and thus by definition - more serious a crime than if the opposite was made. I have heard nothing like that since the earlier days of apartheid.

So, here you have it - self declared white supremacist in Lambeth Walk - not just a basic low-life - a racist one at that.
Posted by Solkhar at 18:56