Musings on the price of power & divine indemnity 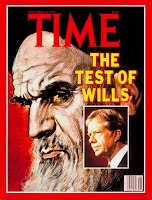 Something significant changed in the world between 1978 and 1979 that has made us all suffer in some form or another. This event opened a Pandora's Box that flows directly up to the horror attacks of September 11 and the subsequent disasters unfolding in front of our eyes in the mountains of Afghanistan and Pakistan.

The events that lead to the creation of the Islamic Republic of Iran may for Iranians be a well debated subject of internal politics, faith and freedom – but it has affected us all, particularly those of us living in the Muslim World. How is this possible, what does the revolution in Iran have to do with the attacks on the WTC, bombings in London or the battles in the high mountain valleys such as the Swat?

Before the revolution of ’79, most radical clerics and ideologues were unwanted outcasts, considered dangerous and had their movements or freedoms controlled by the states they lived in. Many in fact had fled their countries and in an eventually ironic twist, were given easily asylum and migration to the west as political capital on their country of origin (and not knowing what that would cost them later).

The Cold-War, forcing nations to side with one or the other block, left over post-colonial turmoil from often forced unhealthy and inappropriate systems and/or corrupt upper-classes installed by the past colonizer all contributed to many countries in dire need for a change – be it revolution or not.

Iran had all the symptoms, enforced trade, a totally out-of-touch monarchy that played the cold-war game as much as the super-powers did themselves, a large number of radical clerics and a very, very angry and suffering population ready for change. They also had something else – militant revolutionaries ready to struggle by using violence.

The event that occurred in parallel with the revolution was the joining of forces of the radical clerical community with the extreme militant groups and both sacrificing what normally would not be possible – clerics supporting the power-needs of militants regardless of its contradiction to religious principles and the militancy allowing itself to immerse itself completely in the ideology of the cleric and thus completing the combining like a newly mutated virus. The result in the case of Iran was the unified religeo-militant force and the Islamic Republic was born. This new regime with a mixture of force and faith with the all the power in the hands of an automatically ultra-conservative clerical establishment who now believe that they have that right to enforce their way on everyone.

The factor that makes this an issue outside of Iran that has affected us all is that the revolution showed the way for every other radical cleric or would be religious leader to increase their power, if not gain it. They all started seeking out militants who wanted to sell their souls to their ideology for the price of power and divine indemnity to the violence that certainly was coming.

The Muslim world trembled in 1979, not for the loss of the Shah, but for what this mad-unholy cocktail is capable. The more ultra-conservative the country, the greater the threat and it forced some countries to make great mistakes. Saudi Arabia gave in to the long-standing demands for more severe ultra-conservative and radical interpretations of Sharia Law by the Wahhabists. Later on, when attempting to turn back these decisions, some fanatics responded with violence and life-long grudges – such as Osama Bin Laden. Al Qaeda was born out of the fear of another Islamic Revolution and its animosity towards Saudi’s willingness to deal with and support politically the United States, the great capitalist Satan.

Certainly some levels of militant Islamist fundamentalism existed before-hand, but they were in most cases national causes, with clerics taking a senior role in the politics, not the other way around. The Brotherhood was a nationalist organization, certainly involved in ensuring their region’s internal politics was not interfered. Their anti-Zionist colors were clear and obviously politically. Religious overtones were there, everyone in those days would link religion into the argument if it increased popularity or votes. The Brotherhood changed completely after 1979, and the clerics within simply took over.

Even the struggle between Palestinians and Israelis changed, the enemy at the time for the Arabs was no longer the Israeli invaders backed by Uncle Sam – it was the Jews and their Satanic American supporters. Hamas and Hezbollah are all creations after the ideals set by the ’79 revolution.

The tribal groupings of Afghanistan and the mountains of western Pakistan were similarly torn-apart from the results of the cold-war, with the price of generations destroyed (and still to be destroyed) by the drug trade enforced upon them. Much of their tribal values were extreme to outsiders from the beginning, probably a result of the harsh lives and constant wars that passed through the region, Islam had given them a new set of rules that were obeyed and attempted to ensure fairness on this harsh world. The revolution in neighboring Iran changed all that, the radical clerics were quickly willing to allow for increased (and mostly anti-Islamic) tribal cultural influences under the banner of Islam along with the increases and justification of the trafficking of drugs - all if they supported the radical teachings of that cleric.

The aftermath of September 11, the residence of Al Qaeda in the mountains in Afghanistan, the sharing of a common enemy with Taliban is now common knowledge. What is not so commonly known is that so-called wahhabist purists like Bin Laden are of a different radical variation of Islamism than the mockery followed by the Taliban and the two groups split (even violently) at times because the Wahhabist Bin Laden certainly was unable to tolerate the ancient pagan-tribal values of the Taliban. But desperation situations makes for desperate measures.

I believe that the Iranian Revolution affected us all. The horrendous and murderous attacks in the United States, later in Indonesia, Spain, here in Morocco, England and others have affected us all. There are wars in Iraq and Afghanistan, piracy in Somalia, well infiltrated and long-established terrorist-linked groups in Europe (due to that ironic error mentioned above) and obviously more to come before the world is forced to get its act together and change it.

My Muslim World is now suffering the double-whammy of being riddled with radicals whom believe they have the right to change us all to their version of Islam and in some of these countries add to that they have guns willing to do it. Some of the countries, such as Iran which started it all, have imbedded these very principles that strangely the radicals over here in North Africa would find insulting. There is no single radical strain of this fundamentalist virus. The second whammy and for me as serious plus a reason for my blogging, it has created an image problem with the rest of the world that Islam is dangerous and ammunition to every Christian radical and bigoted low-life to spout what I can only find one word appropriate – crap. The image problem is real and to an extent justified, the taking advantage of it by right-wing crap-artists is another.

Whilst observing the current surge of demand for political change in Iran, I continue to muss over what the world would have been like if the Iranian Revolution did not happen. A question that justifiably only God (Allah) knows.
Posted by Solkhar at 18:18