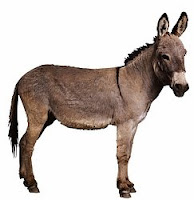 The self-proclaimed but certainly not Muslims Against Sharia did what I consider a pretty disrespectful gaff in one of the many items they are churning out about the situation in Iran. Here in Morocco, they would be referred to as a "Hammar" of donkey, refering to being stupid or an "ass".

MAS (I find it insulting even to spell it out) makes always a big scene to imply they are interested in the rights and liberties of the Iranian people, that the injustices and Islamic system's evil ways thrust upon them. Sounds noble, right? I guess, though it is viewed from a western perspective and automatically assumes that a future Iran will be like a future Iraq and another western-liberal democracy. But remember this site abhors Islam and thus condemns the basic tenants and beliefs of the majority of Iranians who may not love the fundamentalists, suffer from them but are faithful Muslims nevertheless.
The hypocrisy comes in the article today called "Sorry Neda, We Have a Pedophile to Worship". The article starts off with an interesting point that I have seen in some more respectable blogs, that while Iran burns and world history is being made, the American media dropped it like a lead balloon to concentrate on the death of the "King of Pop" Michael Jackson. I think the media does follow celebrities a bit too much, but if it sells ratings, so be it. I should also point out that his death is a sad event and historical, like his music or not, Thriller is still the highest selling album in history and probably that status will never be beaten.
The ugly point of the article is already implied in its name, it apologizes to the now famous victim Neda who died in the street fighting in Tehran that the media and the people are more interested in Michael Jackson - and proclaiming him a paedophile.
Jackson was accused and acquitted under the court system of the charge and he denied it to the end. Under the law, he is not and such a claim is libelous as well. This, itself makes the blogger from MAS a low-life, as it denegrates and disrespects those victims and their families of real paedophiles as well as those who have suffered being accussed of it, but are not.
My point is simple and I am sure many will understand it immediately. How can you pretend to stand-up for liberties and justice and condemn the actions of fundamentalists who by their very nature assume guilt and then unjustly punish people for "probably" being homosexual, a prostitute, immoral, marxist, communist, heretic, revolutionary, etc, and then do the same yourself.
I make no opinion about the lifestyle of MJ, I trust the court system and assume his innocence, because I believe in justice and liberties.
Posted by Solkhar at 12:49