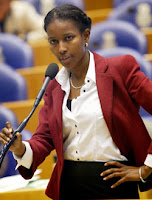 Ayaan Hirsi Ali has released an items that I found in the Australian (http://www.theaustralian.news.com.au/story/0,25197,25635164-7583,00.html) entitled Obama should speak truth to Islam because others can't. Well worded as usual and many, many interesting points but still she misses some critical points that in the end really matter.

The courtship articulated in his speech was peppered with false praise ("... it was innovation in Muslim communities that developed ... our mastery of pens and printing."), feigned common principles and made ridiculous promises to fight negative stereotyping of Islam wherever he encounters it.

This is all part of political rhetoric, but it really doesn't lead to concrete change. This, in my view, is the wrong strategy. Instead of pretending that Muslims invented printing, the President should be confronting them with the key products of the Western printing press. And it's here that Kindles could be of use.

I imagined him offering the king, the sheik and the ayatollah each a Kindle with Abraham Lincoln's case against slavery and for equality. Obama reminded the Muslim world that "black people in America suffered the lash of the whip as slaves and the humiliation of segregation. But it was not violence that won full and equal rights. It was a peaceful and determined insistence upon the ideals at the centre of America's founding."

What she misses is that the rhetoric is an important sign that the United States has at last realised that there is a world out their other than their own and more importantly, recognition and acknowledging that there is no "my world is better than yours".

Her comments that so easily place her experiences in Somalia as an example of the entire Muslim World comes up over and over again in all her writings and this article is no difference. Yes there is a lot of bigotry, personally I think Arab culture especially in the peninsula and gulf states is very sexist and bigoted - but that is cultural and not Islamics.

I would also say she has it again wrong that it is the principles of Islam that the founding of Al Qaida is based on. Al Qaida say they are Muslims, but the KKK say they are Christians, but can you say that the KKK based their prejudices and violence on Christianity? I guess technically yes you can but the total picture will say no, the same goes with the Al Qaida comment.

The problem is her emotional attachment and personal hatred with everything to do with Islam that has made her bad company and not a chance of contributing to a peaceful world - her animosity alienates 1.6 billion of humanity. We all know that fundamentalism and extremism has engulfed much of the Muslim world and so the answer is not to kill-off Islam but to support the Muslim World's liberals and moderates in eliminating that radical element. She is unable to support that.
Posted by Solkhar at 01:47