A lie well worded does not a truth make 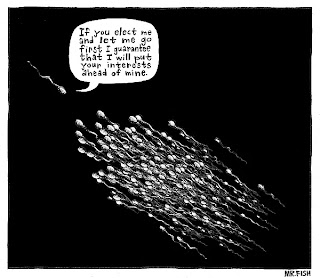 Unfortunately I suffer the human habit of getting caught up in petty arguments when provoked with deliberate garbage. There is no denying that when I was reading the agenda-trash websites I started some arguments - or I should be more accurate - I pointed out errors and raised questions.
I guess it was simply a shock to them that their world of agenda-based bashing and self-encouraging mis-truths, misinterpretations and myths was challenged.
In this case, a rather self-indulgent poster by the name of Nick in his Frozen North blog enjoys playing the word-game, rather than concentrating on the subject but rather my language skills. He considers it a clever ploy to discredit the critic rather than confront with facts.
The recent spat was on one subject but Nick attempted to confuse it by making it two. A accused (and still do) the blog Lambeth Walk of racism. The point I made was that the collective sum of the posts are either anti-Islamic or racist with the bloggist's obvious hatred for immigration spilling over into racial hatred. The constant us & them, them vs the white people, they are the cause and so on to ad-nauseum was collectively racist. An article about a group of African immigrant Brits who raped a girl and her boyfriend made the case, in particular implying it was racially motivated. Nick, not the blogger, claimed defence basically arguing that there was no racist remarks in the article, ignoring the point of collective articles, and started attacking my linguistic abilities and paragraph structure to ensure confusion.
The fact that I fell for arguing with Nick I regret, it was an obvious waste of time and he has done so before hand. He obviously enjoys this process knowing full well that his mastery of English and word-twisting as a weapon is better than my own. But of course it has no bearing on the subject or its validity, that was in fact carefully avoided altogether. When the point was reinforced, the criticism became more insipid and desperate, with the argument now being that the article in question did not follow the definition of "racist". Which was not my point, this is not a court case, but it is the reality and we know Lambeth Walk's low-life blogger's intention. The final curtain on this petty argument was Nick posting another condescending line, a quote and he has ensured that I cannot reply to attempt to provide an image of petty victory. I will now post my reply that he will not post.
“Insensibly one begins to twist facts to suit theories, instead of theories to suit facts.”
Arthur Conan Doyle

Being more realistic
What I should be concentrating on is the articles that I wish to publish here on the blog, thoughts and ideas, examples and possibilities and avoid getting caught in the web of arguing with low-lifes and game-players whom in the reality of all things are just individuals with problems and chips on their shoulders because the vast majority of the world does not think or support them.
The most ironic point about these bloggers is that they to a degree represent the element of fundamentalism that they hate so much. I also hate them, but for completely different reasons. Such bloggers will claim truths and condemn others for not sharing that same bigoted view. Add to that, they will sacrifice principles, norms and participation in the reality, to pronounce their goals even further.
There is a risk here that needs to be pointed out that I fear many do not realize. Being right-wing or left-wing is for me a matter of politics. But there is a progression of extremism/fundamentalism that does occur. Once you go to far to an extreme you are required to sacrifice, as mentioned above and going back is difficult. Geert Wilders did so to the point were he will not back down from his bigotry and slander and I am sure it will become worse before he is booted out of the Dutch parliament. The bloggers that I have come across can just as easily follow down the same path, increased racial vilification, ignoring the accepted norms of society, next it will be inciting violence. The same existed with religious fundamentalism and how it joined militancy and now up to terrorism. The parallels are there, albeit without guns but via the Internet - either way it is unacceptable.
Posted by Solkhar at 12:57