Winds of Jihad - Scrutinized with a D- for originality 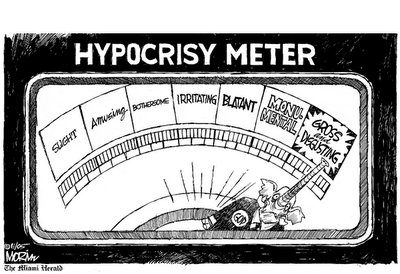 The continuing processes of looking at hate-sites and agenda-based blogs has brought out in me a level of expectations. The usual format is now common-place with misquotes, mixed with mostly right-wing politics and the often well-written but still misguided and questionably motivated blame that Islam is the evil in this world.

It is with this expectation that coming the Winds of Change blog by sheikyermami is such a great disappointment! As mentioned in my postings before, here we have the master of unoriginality and in fact the question is given to why it exists in the first place.

The blog owner does not come up with items himself but copies the works of others - we can only assume because it will make his own blog look a bit more better than it really is. His postings are rather mouthing off when he actually does attempt to write himself and he makes wild allegations and mixes them with pretty poor history examples.

I took him to task a few times over his understanding of history. He goes under the basis that everything and anything touched by Islam is and must be backwards and thus he found it unacceptable to contemplate facts and events that tell us otherwise. He chose to pick on the history of Al Andalus and quoted the failed academic Spencer whom is detested by the academic world. When I pointed out that Al Andalus at times during its 800 year existence in the south of Iberia was the most culturally advanced community in Europe - he attempted to defend the indefensible. His constant and irrational attempt to prove otherwise by quoting subjects like slavery and events in the 11th century as evidence was laughable to say the least. Of course there were events in every nation that were dark hours and quoting one period out of 800 years is not a cheap shot but an academic and intellectual failure. "sheikyermami" in fact had tried to copy the style of Robert Spencer and did a piss poor job of it. Spencer being the master of making accurate quotes and descriptions of events but ensuring that he chooses out a long history only those that suit his point (and carefully avoiding those more numerous events that would prove otherwise).

The blog-owner obviously became rather afraid that his non-serious but ugly Islam bashing and hate-mongering was being pointed out and thus more and more avoided answering directly any points I made - knowing well enough that he had failed. But he made some rather stupid accusations and I would not let him lose on it.

He tried to falsely accuse me of avoiding his own questions - that did not exist. He sort of asked a non-serious one and since I did not answer he stated "Solkhar did not answer my 10 questions!". Going through the entire blog, there was no ten questions so I said give them to me. No such thing, eventually a "question 2" occurred. So much for the existence of the now infamous 10. In fact he later remarked on the Question no.4 posting (yep he is still trying) that he acknowledges and thanks those that have contributed possible questions, confirming that of course the original 10 did not exist.

He made one accusation on Islam that I decided to take him to task on and not let go, knowing full well that he would rather have me cut from posting than answer. He stated that the Jihad (Jihad al Sghrir) is an integral part of Islamic doctrine and that all Muslims must support it and to do otherwise is apostasy or heresy. So I returned the favour and asked him the question and told him that I will not answer his invisible and still not existing 10 questions on Islam until he answers me. So I asked:

"Where in the official institutions of Islam, such as the Five Schools of Islam, is there support, declaring of or sanction any Jihad?". Before I asked that question he tried to quote individual clerics, mostly radicals whom at various times mentioned the word Jihad. When pointing that out, he did the usual squirm and talked about violence in Pakistan or the like.

He will not answer that question because he will avoid denying that he simply lied to support his no-holds-barred mouth-off on Islam. It is a sign of unprofessionally and I simply am disappointed, considering how cheap and nasty his blog is compared to others whom at least try and be smart about their hate-mongering.

A D- is given in this instance because frankly speaking the quality and content are shit.

As a footnote, he has come up with the "I set the conditions for you to post here, Solkhar, not you." Plus added the threat "From now on I will delete any and every post of yours unless you answer the 5 questions I posted for you. Give it your best shot or take your camel and ride!" which is the confirmation that he will avoid answering and not tolerate anyone pointing out what a hypocrit he is. He not only sets nothing but flooding his blog with hate-rhetoric but also allows Christian prosthelitizing along with it.
Posted by Solkhar at 18:16