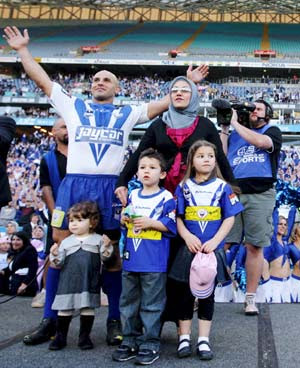 I was sent from Australia the photo and Sydney Morning Herald (smh.com.au) front page item about Hazem El Masri the NSW Rugby League play-maker's final match. It came with a wonderful photo (displayed) that shows him, justifiably proud and his wife (in hijab) and children. That is great and I am happy for him and rather proud to see Aussie celebration directed at a Muslim family and there is no comments or pointing fingers at the wife in her hijab. Great!

But it raises a question, how much is normal and justifiable happiness for a sports celebrity and how quickly it is forgotten and the bigotry and the usual "us & them" rhetoric comes back. This is not about Australia but about the West at all.

Westerners, like other parts of the world, follow the human habit of madly adoring sports. I wonder how many of the bigots and radical right-wing agenda freaks and blogers whom demand the shutting down, eradication or deportation of Islam and Muslims - then goes and supports their favourite football team that has a number of Muslims as part of their integral team. Are the French right-wingers aware that the super-star status Nicolas Anelka (see photo below with Samir Nasri), Éric Abidal and Franck Ribéry are all Muslim converts, let alone those born Muslim such as Zinadine Zidane? In fact Zidane is a perfect example of being identified with France and Football but is he identified and acknowledged as being Muslim? 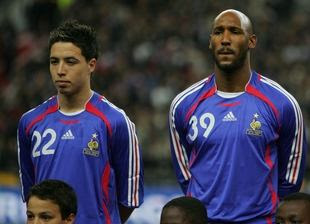 Perhaps the greatest ever boxer Mohammed Ali has been clearly identified as Muslim because of his public battle to do so, but how much of that latter support, enthusiasm and loyalty actually included the value that he took so seriously - and how many that supported him in the ring actively despise his faith as "evil". Was it the case with fellow boxers Anthony Mundine from Australia, Britain's Danny Wilson and American boxers Bernard Hopkins and Mike Tyson.

Football is probably the thing that catches out the armchair bigots whom declare a hatred (and worse) against Islam but will go out and celebrate and get drunk over a football match, hypocritically ignoring the bigotry for the duration of the match. Even British hooligans who will later go out and punch a Paki or two but will sing the Notts County Anthem not realising that their star striker Lee Hughes is a Muslim convert and most Rotterdamers like myself do not realise that their famous "son" and international footballer Robin Van Persie is a Muslim (and married to a Moroccan like myself as well).

Apart from the many African favourites playing in the European football leagues many of the great personalities are just "footballers" and are forgotten that they have faiths and beliefs that some of these bigoted fans ignore. Frederick Kanoute, Sevilla , El Hadji Diouf, Salomon Kalou, Nihat Kahveci, Diomansy Kamara, Samir Nasri, Zlatan Ibrahimovic and Hassan Salihamidzic are all sung and cheered and then later condemned.

I wonder with all the remembrance, memorials and rebuilding of Michael Jackson and the Jackson Five that anyone cares that Jermaine Jackson is also a Muslim convert.
Posted by Solkhar at 14:44