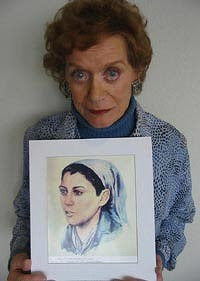 The following is repeat from an article sent to me about the life of Dinah Babbitt whom recently died. Who is she?

This short obituary from the Sydney Morning Herald says it all. It shows the greatest and the most basest of what mankind is capable of, but most of all it tells of survival. I give full credit, reference and acknowledge rights to SMH and hope they do not mind my putting this out in full. Reference and link as at the end of the docuement.


The artist Mengele spared to document his wicked work
August 28, 2009

DINAH BABBITT'S life was spared at Auschwitz by Josef Mengele, the infamous Nazi physician known as the Angel of Death, because of her skills as a portrait painter.
Mengele, with a flick of his hand, selected Dinah for survival on the basis of a fresco she had painted in the children's barracks of Birkenau. In 1943 her skills were deemed to be superior to colour photography. The fresco was a reconstruction of a scene from the film Snow White and the Seven Dwarfs, which she had seen in Prague; she had removed her yellow star, which Jews were forced to wear, to get into the cinema.
Mengele provided Dinah with watercolours and said that she was to illustrate his experiments. He fancied himself as an anthropologist and told her that he wanted to document the inferior physiognomy and organs of Jews and Gypsies.
She bargained for the life of her mother, threatening to run into the camp's electric fence unless she, too, was spared. ''I'm not staying here without my mother alive,'' Dinah said she told Mengele.
While painting a portrait of Mengele, he asked her if she had noticed something about him that only his wife had ever observed. Without pause, she mentioned a flat, round birthmark, which she had likened to the tags inserted in the ears of stuffed dachshunds sold as children's toys. He laughed and nodded.
Such was the wit, intelligence and manipulative genius of the painter, who spent two years in Auschwitz - a feat of survival matched by few others. She said humour and a tradable skill were keys for survival. Locksmiths, plumbers, doctors or artists survived; so, too, did twins.
Babbitt, who has died of cancer in Felton, California, at 86, was born Annemarie Dinah Gottliebova in Brno, Czechoslovakia, and studied art in Prague until Jews were turned away from school. She spent a year as a prisoner in Theresienstadt, where she fell in love and, despite the terror, described that time as the happiest year in her life. She was then shipped to Auschwitz.
Babbitt liked to describe a scene that exemplified the use of humour of concentration camp life. A double latrine with two stalls stood in the family compound, separated by a flimsy piece of see-through material. As Dinah was leaving one stall and a man the other, he said to her: ''My lady, not to anger the gods by saying so, you look still well.'' This was a panegyric. He was referring to the fact that he had seen her backside through the partition.
Her lover from Theresienstadt died from typhus in the last few days of the war. After a few months in Paris, where she scandalously, at the time, had an affair with a black musician in Duke Ellington's band, she worked as an animator with Warner Brothers in California and married Art Babbitt, the animator who had worked on Snow White. She worked on characters including Wile E. Coyote, Daffy Duck and Tweety Bird.
Dinah Babbitt reared two children, attended wild Hollywood parties, divorced and later loved again. She prolonged her good looks with several facelifts, told bawdy jokes and even in her 80s talked about death, sex and life.
A sad aspect was that, in 1973, she learnt that the Auschwitz Museum held some of her Gypsy portraits. She travelled to Auschwitz, determined to finally liberate at least the memory of those she had painted by taking the portraits home and perhaps to the Holocaust Museum in Washington but the Polish museum authorities refused, saying that if the paintings belonged to anyone, it was Mengele's descendants.
Her nephew and a pair of Mengele twins, Annetta Able and Stephanie Heller, live in Melbourne. Babbitt and her mother helped the twins survive Auschwitz. Two daughters survive her.