Right-wing genie out of the bottle

Below is a disturbing item I found in the Sydney Morning Herald today about the level of far-right extremists in Australia attempting to form Political Parties. It has been four years since the last pathetic experiment with One Nation, now the Australia First Party and the Australian Protectionist Party are attempting to be registered and allowed to enter elections.

.
"Mr Saleam, who gained a doctorate in political science while serving a 3½-year-jail term for possessing a firearm and organising a shotgun attack on the home of the African National Congress's Australian representative."
.
....
Right-wing genie out of the bottle
Erik JensenJuly 9, 2009
THE party faithful gathered in "the bunker". In a room decorated with Heidelberg School art posters and Ned Kelly figurines, Jim Saleam, the NSW director of the Australia First Party, recited the Eureka Oath.
The father of far right politics in Australia told the dozen people gathered around a plastic trestle table - a group too small to entertain registration as a federal political party - that they were on the cusp of return. "We are a genie in the bottle," he said. "When the system itself says it's in trouble we must welcome that.
"For, Australia, we are now moving into the most extraordinary of times."
Five months since that meeting in a former shop in Tempe, the genie is out of the bottle: today Australia First will announce itself as the first anti-immigration party since One Nation to gain enough members to contest a federal election. The party finished signing the 500 members on Monday and expects its application to be lodged in a fortnight - five years after it was last deregistered and four years since One Nation lost its final federal seat.
"The registration of Australia First Party … will be a decisive act in uniting all Australian nationalist and patriotic groups and people," Mr Saleam wrote in a newsletter. "At first in common labour and then into a single movement."
The party plans to contest lower house seats in western and southern Sydney, on the Darling Downs and possibly in the Hunter. It expects to attract between 6 and 7 per cent of the primary vote and will run a television campaign aimed at the trucking industry and an anti-immigration policy made more palatable by linking population to environmental issues.
The elevation of Australia First into a party capable of winning seats is in line with events overseas. Against the backdrop of the global economic crisis, far right organisations such as the British National Party made a strong showing at last month's European elections.
In the past few months skinheads from the Southern Cross Hammerskins have started organising to induct members and set up a record label and an internet radio station. The Ku Klux Klan has established a presence in Victoria with links to the expanding klan in the US. The Australian Protectionist Party - which split from Australia First in 2007 - is preparing to lodge its own federal registration.
"Australians tend to be fairly non-political in their outlook," said Darrin Hodges, the protectionist party's NSW chairman and Mr Saleam's key rival. "You have to work on educating people [that] there's a problem there, and we're making progress with that."
Australia First began its return to federal politics on Australia Day, when Mr Saleam managed to associate himself with a mob of teenagers chanting nationalist slogans at Manly - a gathering which was played down by politicians and the police media unit, but which is being investigated as possibly the first act of co-ordinated racism since the Cronulla riots in 2005.
Working in the background, police were attempting to link the mob to an unnamed nationalist group uncovered in western Sydney a week earlier. The mob of 80 people who raced up and down the Corso on January 26, smashing cars and chanting, appeared to be organised rather than a drunken pack, though there is nothing to suggest that Mr Saleam himself was directly involved in any vandalism.
The group split in half at a decisive moment, weakening police efforts to contain them.
"Police have played this down significantly. It's just going to be worse next year," a senior police source said. "There is the push on for nationalism and if we don't get a grip on this we will be looking at something we did not think could happen in Australia. You can't put the genie back in the bottle."
Two factors are working in favour of the ultra-right. Despite a 20 per cent cut to skilled migration numbers, Australia First and the Australian Protectionist Party expect the recession to create instability and resentment of non-white labour. At the same time, party members disenfranchised by the collapse of One Nation have begun to return to the movement.
"We'll start seeing a lot of protest voting," said Mr Saleam, who gained a doctorate in political science while serving a 3½-year-jail term for possessing a firearm and organising a shotgun attack on the home of the African National Congress's Australian representative. "We will see not only defence of identity but defence of jobs. If that spills over into reasonable-level confrontation, I would support that.
"We want to turn ordinary people - suburban housewives, unemployed youth - into political activists. We seek to mobilise a group of people who have not previously been mobilised. We want to cause disaffection from the regime who govern against their own people. We want to mobilise small-t troublemakers."
But despite the recent rise in membership, the new right is very much the old right and Jim Saleam remains at the centre of it. Australian nationalism is a fractal of hyperlinks and blog posts, tied to reality by the occasional post office box.
John Moffat, an aged-care worker with tattooed forearms and spiked hair, is a prime example of the movement. He arrived at a meeting of the Australian Protectionist Party in late February.
Mr Moffat has previously been an Australia First candidate and ran for the now-defunct Australians Against Further Immigration before it was absorbed into One Nation.
"I've just been waiting with my finger up to the wind," he said. "But with the crashing of the economy, let's say the tribes will start to consolidate. From this meeting, I've got a little bit of hope. I just picked up a membership form. More than likely, I will join them." 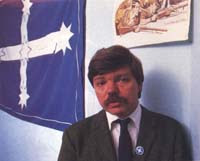