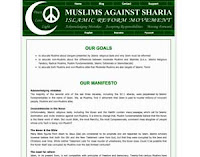 Aparantly this Khalim Massoud was rather angry at being investigated and started a smear campaign against Mr Warner. I have seen some of the items, they certainly go through a lot of rhetoric and language but actually all references and quotes given are to his own items and blog-sites but of those accusing Warner – none! Warner is no man’s fool – a professional response and a good one is noted below:
http://pibillwarner.wordpress.com/2009/03/20/irs-us-secret-service-omaha-nebraska-khalim-massoud-and-muslims-agaisnt-sharia/
IRS & US Secret Service Omaha Nebraska, Khalim Massoud and Muslims Against Sharia
INTERNAL REVENUE SERVICE CRIMIANL INVESTIGATIONS, FRESNO, CA 93888
US SECRET SERVICE, 2707 N. 108th St. OMAHA NE. 68164, PH 402-965-9670
Are the online attacks by the author of the “
Muslims Against Sharia” aka Khalim Massoud with an email address of reformislam@gmail.com who has Defamed and Intends to cause an interruption of Bill Warner’s business, WBI Private Detective Agency, by posting libelous messages, linked to the al-Muhajiroun group, same tactics are being used, see Friday, March 20, 2009, PI BILL WARNER QUOTED IN “FAMILY SECURITY MATTERS” EXPOSE ON MUSLIM JIHAD GROUP “AL-MUHAJIROUN”
The Chasing Evil website and blog also caught onto the issue of MASh and came out with many interesting facts and opinions, I have put only a portion, the reference is there for anyone interested. Chasing Evil is run by the Reverend Sutter and has good mix of inter-faith contributions.
http://www.chasingevil.org/2009/03/non-muslims-against-sharia.html
Curiously, the site contains absolutely NO membership or governance information at all. No indication of who created this organization, who its members are, who manages it, who governs it, who sets its policies and direction…nothing. Sort of odd for a non-profit advocacy group - especially one that’s fundraising.There is, however, a page that allows you to donate by Paypal, Mastercard, Visa, or Amex to “help fight Islamofascists”. And that page lists the donors. The first “donor” on the list, if you google it, turns out to be the Executive Director of the organization. The second “donor”, turns out to be a member of the organization who seems to spend most of his time posting anti-Muslim taunts on various blogs. At that point I stopped Googling “donors”. Feel free to continue down the list - I’d be curious. There aren’t many of them.Back to the home page, where the organization’s “Manifesto” is set out. And here again, one is struck by the uncanny similarity between the agenda of this allegedly “Muslim” group, and that of American and European neo-nazi sites that claim to support “moderate” Muslims while actually trashing anything Islamic.Among the elements of this “Muslim” “Manifesto” are such popular right wing talking points as “the Crusades were not unprovoked acts of aggression, but rather attempts to recapture formerly Christian lands controlled by Muslims”, and “We must remove evil passages from Islamic religious texts, so that future generations of Muslims will not be confused by conflicting messages.”
I have sent emails to all the above asking for updates and how I can support and help. Already I have contacted all those linked with MASh to warn them of the scam and the hate-mongering nature of the site, most have returned with shock and dismay (having just took the words of “moderate Islam” as enough and a number said that they will contact demanding their links be removed.
I certainly will keep you all up-to-date on the matter.
Posted by Solkhar at 12:46