UPDATE - WERNER CRACKS UP A BIT.....MORE 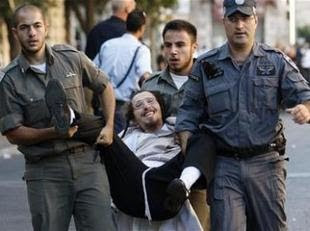 Has Werner, aka the Sheik, gone even a bit more radical than usual?

Perhaps knowing he has been properly exposed and does not allow any postings from a Moroccan ISP to avoid my reminding people who and what he really is, has made him a bit ....... annoyed.

His posting style has changed and is certainly more aggressive and frankly more ludicrous.

In a posting with a photo showing the US President meeting on AF1 with his top General managing the war in Afghanistan, Werner makes the comments that it is despicable that he was given 25 minutes with the President.

What is despicable is the fact that Werner, presuming there is some semblance of intelligence with the man from tropical Queensland's Cairns, that he very well knows from basic news watching that Obama two days before and on a regular bi-weekly basis has a 3 hour video conference with the General and his main staff along with all the Chiefs and experts back in Washington. We know that Werner Reimann is far-right, but in this case he may have fell over.

Another interesting thing, from the Kahane supporting radical Jew who professes on a number of times that he knows more than any Imam or other Muslim scholar on the subject of Islam and the history of Muslims, that he is unable to distinguish between the differences of the Hagia Sophia Cathedral of Byzantium that became the Aya Sofia Mosque in Istanbul and he called it The Blue Mosque. I thought perhaps that it was a simple accident but actually no, considering he went to great lengths to criticise the minarets and basically condemn it as a bastion of some pro-Sharia, Caliphate symbol. For such an "expert", we can assume then that it is all a deliberate lie, because any research or basic knowledge will come out with the fact that the Mosque/Cathedral was closed as a place of worship and has been a Museum to the City's great history and the two religions for many, many years now. The Blue Mosque is the city's principle Mosque and well known for its "state supporting" moderates. So, did Werner lie or was he just producing more and more foolish bullshit?
.
To be honest, he is a liar for his known agenda. On the above issue that was about bashing Turkey in any format possible he states that country has been put on the Watch List of U.S. Commission on International Religious Freedom or USCIRF. Now, notwithstanding the fact that Turkey was put on the list and has been not allowing religious freedoms of certain groups, the fact is that Werner Reimann avoids pointing out that of the 12 countries on this Watch List, six are Muslim and six are not. Here is the item from the USCIRF website set below:
USCIRF Watch List

In addition to its CPC recommendations, the Commission has established a Watch List of countries where religious freedom conditions do not rise to the statutory level requiring CPC designation but which require close monitoring due to the nature and extent of violations of religious freedom engaged in or tolerated by the governments.

I was pulling the plug on watching Werner's blog because of its basic Kahanist propaganda, but now it has become rather an interesting exercise in desperate actions of a madman exposed.

.........
UPDATE Oct 8.
Werner Reimann puts in his blog an item/comment by Jordan's King Abdullah that unilateral action by Israel could ignite a tinderbox in Jerusalem. A logical comment from someone who is up-to-date on the issue.
What does Werner comment - "no Arabs - no tinderbox".
Just more confirmation that Werner Reimann is in fact a violent-supporting radical of the same ilk as - Kahane, Bin Laden, Hitler and Stalin. We can all be thankfull that the businessman from Cairns in sunny Queensland, Australia is just that.
Posted by Solkhar at 20:10